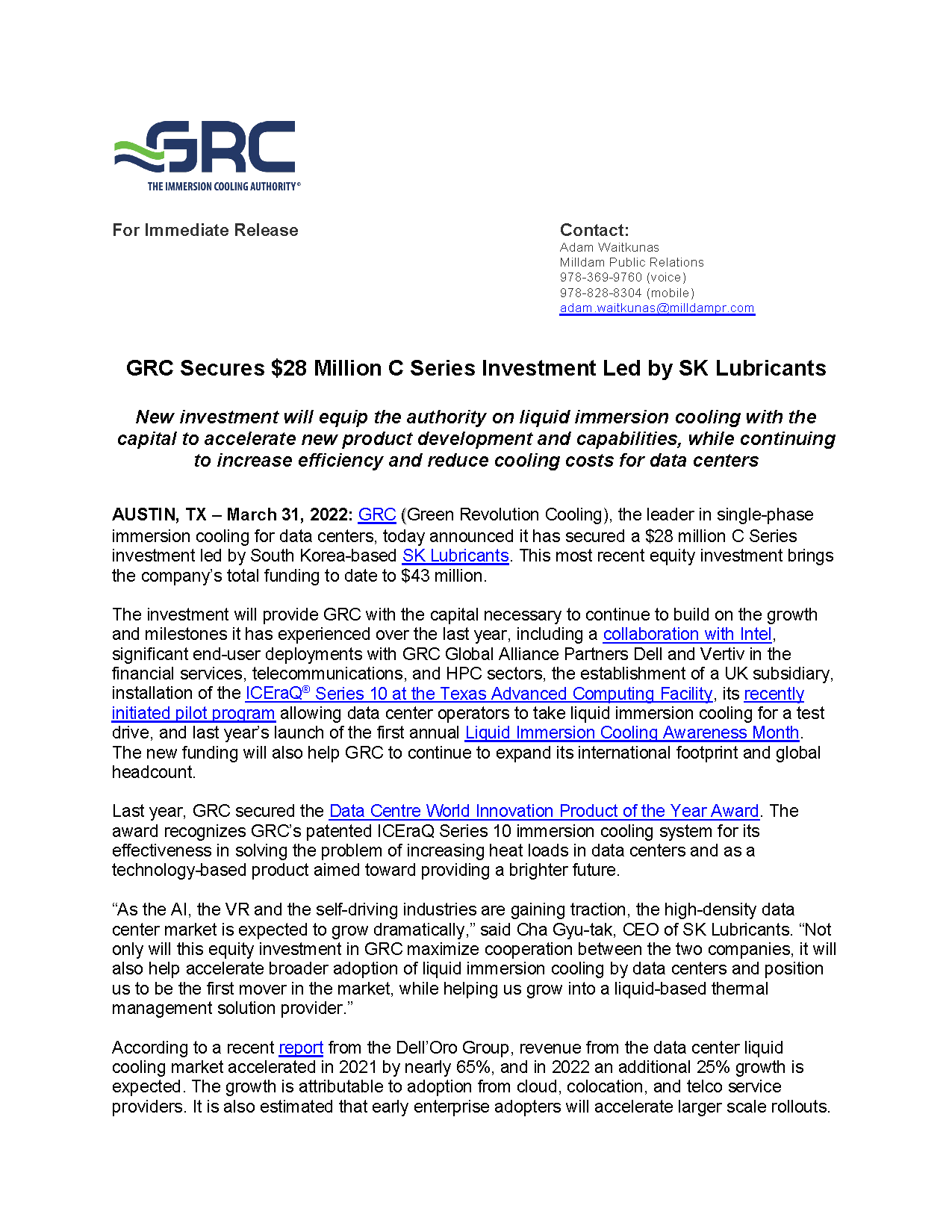 New investment will equip the authority on liquid immersion cooling with the capital to accelerate new product development and capabilities, while continuing to increase efficiency and reduce cooling costs for data centers

The investment will provide GRC with the capital necessary to continue to build on the growth and milestones it has experienced over the last year, including a collaboration with Intel, significant end-user deployments with GRC Global Alliance Partners Dell and Vertiv in the financial services, telecommunications, and HPC sectors, the establishment of a UK subsidiary, installation of the ICEraQ® Series 10 at the Texas Advanced Computing Facility, its recently initiated pilot program allowing data center operators to take liquid immersion cooling for a test drive, and last year’s launch of the first annual Liquid Immersion Cooling Awareness Month.  The new funding will also help GRC to continue to expand its international footprint and global headcount.

Last year, GRC secured the Data Centre World Innovation Product of the Year Award. The award recognizes GRC’s patented ICEraQ Series 10 immersion cooling system for its effectiveness in solving the problem of increasing heat loads in data centers and as a technology-based product aimed toward providing a brighter future.

“As the AI, the VR and the self-driving industries are gaining traction, the high-density data center market is expected to grow dramatically,” said Cha Gyu-tak, CEO of SK Lubricants. “Not only will this equity investment in GRC maximize cooperation between the two companies, it will also help accelerate broader adoption of liquid immersion cooling by data centers and position us to be the first mover in the market, while helping us grow into a liquid-based thermal management solution provider.”

According to a recent report from the Dell’Oro Group, revenue from the data center liquid cooling market accelerated in 2021 by nearly 65%, and in 2022 an additional 25% growth is expected. The growth is attributable to adoption from cloud, colocation, and telco service providers. It is also estimated that early enterprise adopters will accelerate larger scale rollouts.

“We’re delighted to partner with SK Lubricants, and this most recent investment will allow us to expand the important work we are doing to future proof the cooling infrastructure of data centers globally,” said Peter Poulin, CEO, GRC. “With the increased attention on data center efficiency and more broadly proposed environmental reporting standards for organizations across the globe, the investment will also help GRC contribute to a more sustainable data center environment while having a positive impact on the bottom line.”

While air cooling has been the dominant cooling solution in data centers, there is a power-density and geo location point at which air cooling cannot compete with more efficient cooling methods. Liquid immersion cooling leverages higher thermal transfer rates to support highly efficient and cost-effective cooling of high-density racks.

GRC is The Immersion Cooling Authority®. The company’s patented immersion-cooling technology radically simplifies deployment of data center cooling infrastructure. By eliminating the need for chillers, CRACs, air handlers, humidity controls, and other conventional cooling components, enterprises reduce their data center design, build, energy, and maintenance costs. GRC’s solutions are deployed in twenty countries and are ideal for next-gen applications platforms, including artificial intelligence, blockchain, HPC, 5G, and other edge computing and core applications. Their systems are environmentally resilient, sustainable, and space saving, making it possible to deploy them in virtually any location with minimal lead time.