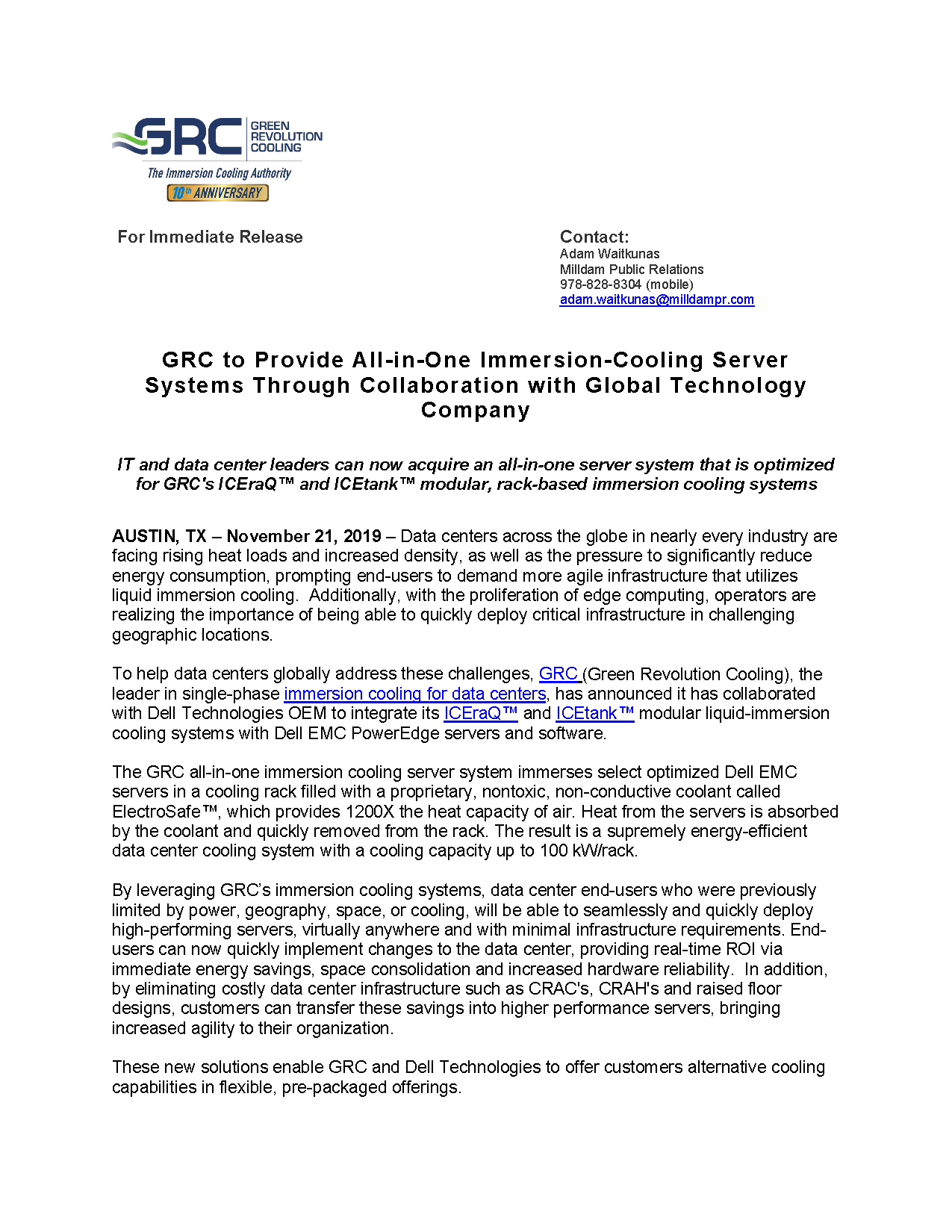 IT and data center leaders can now acquire an all-in-one server system that is optimized for GRC’s ICEraQ™ and ICEtank™ modular, rack-based immersion cooling systems

AUSTIN, TX – November 21, 2019 – Data centers across the globe in nearly every industry are facing rising heat loads and increased density, as well as the pressure to significantly reduce energy consumption, prompting end-users to demand more agile infrastructure that utilizes liquid immersion cooling.  Additionally, with the proliferation of edge computing, operators are realizing the importance of being able to quickly deploy critical infrastructure in challenging geographic locations.

The GRC all-in-one immersion cooling server system immerses select optimized Dell EMC servers in a cooling rack filled with a proprietary, nontoxic, non-conductive coolant called ElectroSafe™, which provides 1200X the heat capacity of air. Heat from the servers is absorbed by the coolant and quickly removed from the rack. The result is a supremely energy-efficient data center cooling system with a cooling capacity up to 100 kW/rack.

“GRC is thrilled with the opportunity to have worked with Dell Technologies on this integrated solution,” said Jim Weynand, Chief Revenue Officer, GRC. “This business collaboration gives data center customers a seamless experience, and with these product bundles, they can easily integrate Dell Technologies hardware and software into a complete cooling solution. Because they can purchase our solutions directly from Dell Technologies, it eliminates barriers to buying the system and allows customers to easily integrate GRC’s systems as modular solutions.”

“Dell Technologies  worked with GRC to help them develop a solution that gives customers added value across a range of verticals,” said Ron Pugh, vice president and general manager of Embedded & Edge Solutions, OEM, Dell Technologies. .  “With GRC’s modular solutions, we are able to provide customers with flexible options for their most challenging data center deployments.”