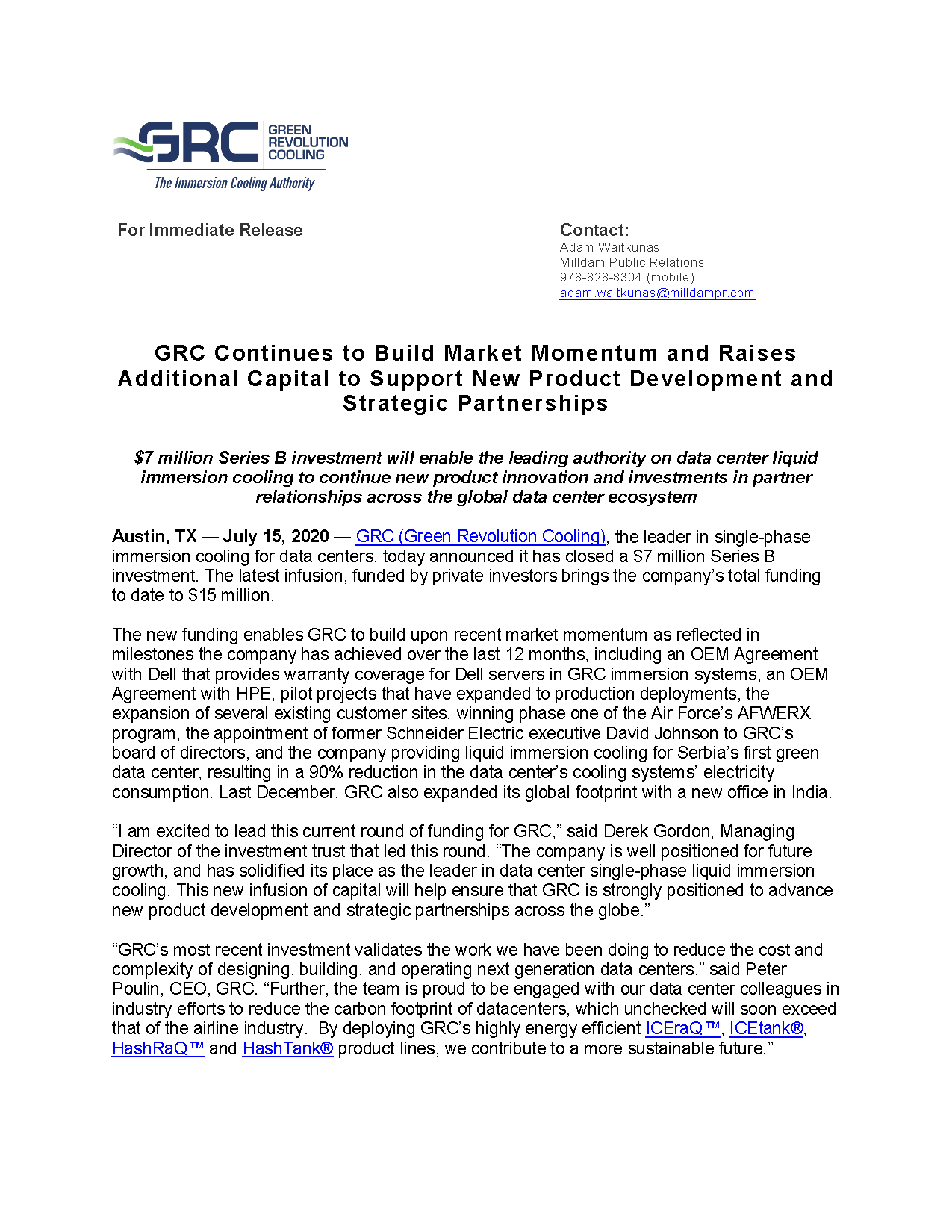 The new funding enables GRC to build upon recent market momentum as reflected in milestones the company has achieved over the last 12 months, including an OEM Agreement with Dell that provides warranty coverage for Dell servers in GRC immersion systems, an OEM Agreement with HPE, pilot projects that have expanded to production deployments, the expansion of several existing customer sites, winning phase one of the Air Force’s AFWERX program, the appointment of former Schneider Electric executive David Johnson to GRC’s board of directors, and the company providing liquid immersion cooling for Serbia’s first green data center, resulting in a 90% reduction in the data center’s cooling systems’ electricity consumption. Last December, GRC also expanded its global footprint with a new office in India.

“I am excited to lead this current round of funding for GRC,” said Derek Gordon, Managing Director of the investment trust that led this round. “The company is well positioned for future growth, and has solidified its place as the leader in data center single-phase liquid immersion cooling. This new infusion of capital will help ensure that GRC is strongly positioned to advance new product development and strategic partnerships across the globe.”

“GRC’s most recent investment validates the work we have been doing to reduce the cost and complexity of designing, building, and operating next generation data centers,” said Peter Poulin, CEO, GRC. “Further, the team is proud to be engaged with our data center colleagues in industry efforts to reduce the carbon footprint of datacenters, which unchecked will soon exceed that of the airline industry.  By deploying GRC’s highly energy efficient ICEraQ™, ICEtank®, HashRaQ™ and HashTank® product lines, we contribute to a more sustainable future.”

GRC is the immersion cooling authority™. The company’s patented immersion-cooling technology radically simplifies deployment of data center cooling infrastructure.  By eliminating the need for chillers, CRACs, air handlers, humidity controls and other conventional cooling components, enterprises reduce their data center design, build, energy, and maintenance costs.  GRC’s solutions have been deployed in seventeen countries and are ideal for next-gen applications platforms, including artificial intelligence, blockchain, HPC, 5G, and other Edge Computing and core applications.  Their systems are environmentally resilient, sustainable, and space saving, making it possible to deploy the solution in virtually any location with minimal lead time. Visit http://grcooling.com for more information.